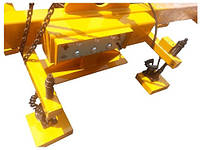 A Spreader Beam Electro Permanent Magnetic System is the most efficient and cost- effective way for lifting various sizes of MS sheets, plates etc. A spreader beam EPM system consists of a multiple arrangement of electromagnets placed in a design so as to gain the maximum output of each of the magnets. The design is so good that they in turn form a stable structure that can lift very large dimension sheets with ease. Spreader beam EPM is a very useful resource for industries that have to deal with huge amounts of day to day material handling.

Made completely out of steel. Forged hooks, heavy duty chains, Spreader Beam Electromagnets provide the best sheet lifting solution for lifting and transporting large size sheets from one place to the other within the shop floor. It uses an Electronic Control Board Panel to operate with ease. It can lift, hold and drop sheets with a click of a button!

Important factors for the safe operation of lifting device:

Load characteristics other than just weight must be considered in order to determine the weight that any magnetic lifter can lift. This statement is true for any lifting magnet because they all operate on the same fundamental laws of Physics. Magnetic power is pictured as lines of force flowing from North to South Pole. Anything that limits the flow of these magnetic lines of force obviously reduces the magnet’s lifting ability. There are four important factors which limit the flow of these lines of force.

Magnetic lines of force do not flow easily through air, they need iron in order to flow freely. Therefore, anything that creates an air gap between a magnet and the load, limits the flow of magnetic force and thus reduces the lifting capacity of a magnet. Paper, dirt, rust, paint and scale act in the same way as air, so also a rough surface finish between the magnet and the load.

When the length or width of a load increases, it ceases to lie flat and the load begins to drop at the edges. The drooping/sagging of the load can create an air gap between the load and the magnet. If this occurs then the lifting capacity of the magnet is reduced.